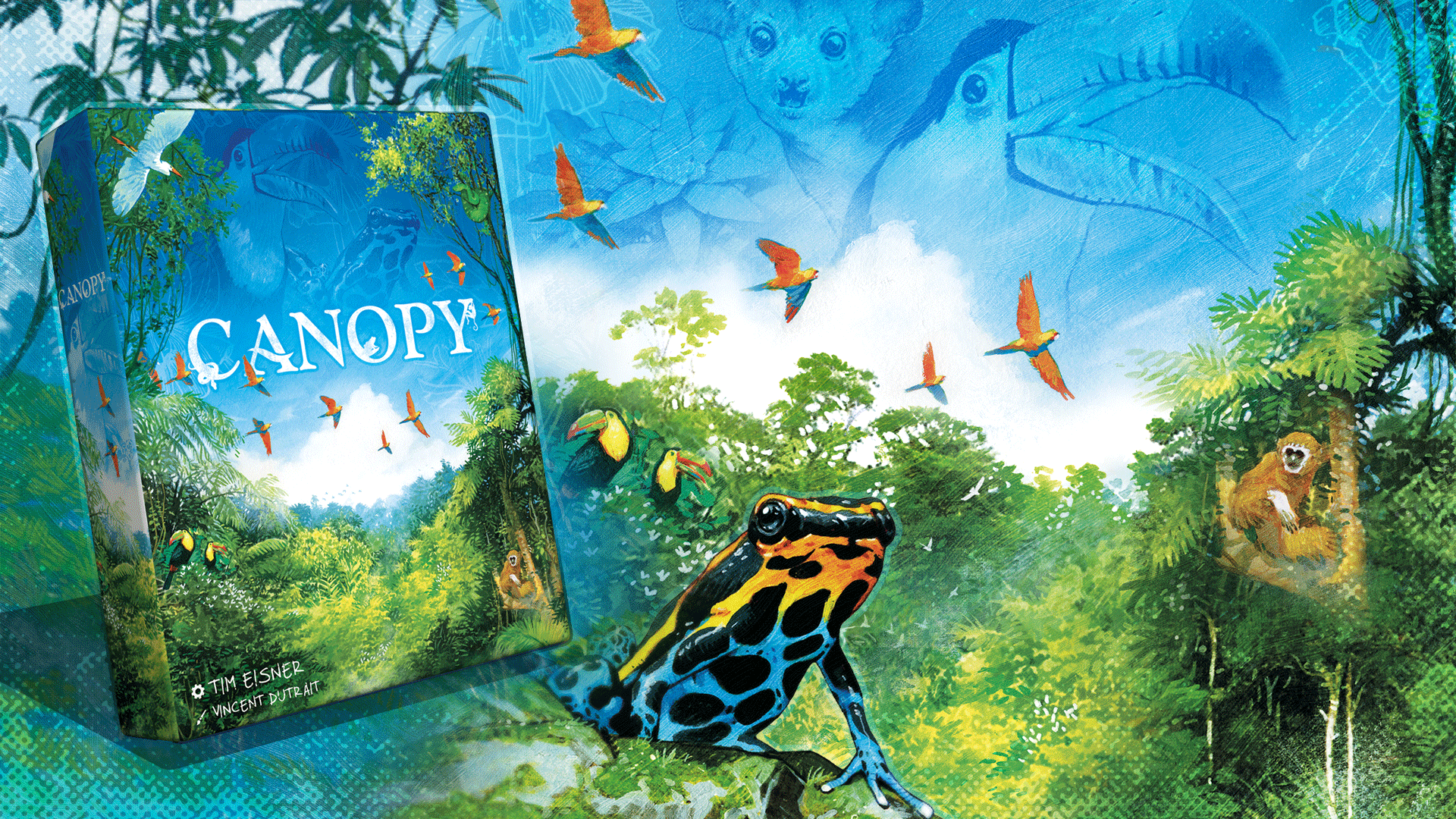 Wow, what a weekend! This campaign keeps growing steadily and thanks the nearly 2,000 backers who have joined, we are now over $51,000 in funding and have 8 Stretch Goals unlocked with many more to come.

Crossing the $51,000 mark, an explosive flash was seen bringing potential danger or opportunity to the forest. Our newest Stretch Goal adds two new Lightning cards to the game. This Threat card is not entirely bad and gives the player who chooses it two options.

The Lightning card's ability reads "Choose one: Both players discard two cards. Both Players draw two cards from the Current Season deck." Lightning, while posing risks and damaging forests, also releases nitrogen from the air, which helps plants to grow. Will you control the lightning and choose if it is positive or negative, or let the other player decide?

The Jaguar is Chosen

The backers have spoken loudly and clearly, and the Jaguar will be the newest species to join the game. Thanks to the over 350 of you who voted and to the hundred or so of you who created such a fantastic list of species with your suggestions.

We have brainstormed 3 potential abilities that the Jaguar could have in the game and it is up to you all to decide which one we will include:

Another Species: This first round of voting was so successful and fun that we are going to create another species with your help. To narrow down the list of potential species we would first like to know what type of species you would like us to focus on for the next Backer Created Species:

Voting for the Jaguar's ability and new species type will be open until Wednesday night at 10PM CST. In the meantime Vincent has already started illustrating the Jaguar so we will have art for that later this week. Thanks for helping us bring a new species into the forest.

While you are on BGG if you can thumb this image of the box that would be great. If we get enough thumbs it will put the box cover on the front page and help us get more eyes on the project. https://boardgamegeek.com/image/5477549/canopy

Thanks and we'll see you in the trees!

We are spreading our branches higher and higher into the Canopy and reaching towards the sun. We have just crossed the $46,000 threshold unlocking 3 new Shifting Seasons cards which will be added to all pledges.

We've now added 3 additional Shifting Seasons to the game. This mini-expansion, that is included in all copies of the game, offers an advanced play variant. When playing with the Shifting Seasons, you reveal one card at the start of each Season. The cards have an effect that changes the game for both players. Some Shifting Seasons change or add scoring conditions, others allow extra draws and more. We are excited to add more Shifting Seasons cards as they provide a nice variable feel to each game.

For backers new to the campaign or if you missed the last few updates we are in the midst of our vote to determine which new species will join the game. Backers have submitted an extensive list of species which could be added to the game and it is up to you all to vote on which one will join us in the canopy.

Voting is open until tonight Saturday at 10PM CST. The majority of voting is taking place on Boardgamegeek.com. If you do not have an account you can also vote in the comments section on Update #4 here.

There are a ton of fantastic suggestions and we are excited to start brainstorming potential abilities for whichever species ends up winning the vote.

What is your Favorite Season?

One reason I love rainforests is I love summertime and heat. I would love to hear what your favorite season is and why in the comments. I hope you all have a nice and relaxing weekend!

Wow! My goodness! This has been a stellar and exciting week. We love seeing all your enthusiasm for the game. Our rainforest crew keeps growing at a steady pace and we are excited to unlock even more awesome content over in the next 2 weeks.

The Orchid is a beautiful and vibrant flower. In the rainforest it most often grows as an epiphyte (making its home on trees). By reaching this stretch goal we are adding 3 Orchid cards to the game.  Orchids have highly specialized pollination requirements and thus many species bloom for longer amounts of time to increase their chances of pollination.  In the game, we represent this by having Orchid cards persist from one Season to the next, and only score at the end of the game.

Orchids, while resilient, are sensitive to big shifts in weather. Epiphytic orchids,  growing high in the canopy can get burned by too much direct sun.  Many orchids in tropical forests adapt to very specific niches in habitat and are thus more likely to be impacted by climate change. This is represented on the card by the excess of weather in one direction or another, which will force you to discard the Orchid before it can score.

In game play terms the Orchid is only discarded if you have two or more unmatched Weather (2 Suns and no Rain or vice versa). The Orchid is worth 5 points, but only scores at the end of the game so you must  be very careful with which Weather cards you take. The Orchids add a fun, high-risk, high-reward choice to the game and lead to exciting and tense moments.

We are excited to add an art print/postcard to each pledge of the game. Vincent Dutrait has done a phenomenal job illustrating the game and we want to share that as much as possible. This art card will be approximately 5 x 4 inches (12.5 x 10cm ) and fit within the game boxes, and can be kept and appreciated or sent to a friend to share the lovely art from Canopy.

The vote for which species to include in the game is underway at Boardgamegeek.com. Voting is open until Sunday, June 28th. For more info check out Update #4 here.

While you are on BGG, you can give the image of the Game Box Cover a thumbs up and it will help us spread the word about the game!

Our next Stretch Goal is at $46,000 and will add three additional Shifting Seasons cards to the game. More info on this mini expansion in the next Update. Let's keep this rainforest growing!

On this lovely third day of our campaign we find ourselves having crossed the auspicious $33,000 mark unlocking the Solo Play Variant for Canopy. We are also ready to undertake the vote to see which species will join the game for our backer created species stretch goal. Let's go over the solo mode first and  then we'll dig into voting.

The solo mode for Canopy pits the player against the Verdant Forest, an unrelenting opponent who always takes the largest New Growth pile, but has forewarning of any Threats and will avoid those piles unless they are full to the brim with goodness. The game remains largely the same as in two player but you will have some control over what you leave for your opponent. The non-player opponent has a few special rules they follow that guide them as well. In our testing the game has been fun, strategic and difficult and most importantly it preserves the push-your-luck drafting and set collection elements of the two player game. We're excited to share it with you.

This stretch goal also includes a handy dandy reference card that details all of the alternate rules for the Solo Game.

We received a ton of great suggestions from many of you, and now it is time to vote on which one will be included in the the game. We have set up a poll on Boardgamegeek.com where you can vote for your favorite. Voting will be open until Sunday, June 28th. Once the winning species has been selected, I will start designing a few potential abilities for that species. We will then do a second round of voting to give you a chance to weigh in on which ability you think best fits that species and should be added to the game. Thanks for your help in making this game!

Voting on Boardgamegeek helps raise awareness for the campaign and uses a handy polling system. However, if you do not wish to vote on Boardgamegeek  you can still vote by commenting which three species you would like to see added to the game on this update.

*Please note that while we had many fantastic suggestions we limited the species to those found in Central and South America as that is where the game is based.

Already on the horizon, attracting our eyes from a distance we can see a most delicate and distinguished blossom At $37,000 we will unlock the Orchid. We'll save all the details on this majestic plant until we reach the goal.

In the comments we'd love to hear what the most beautiful thing you have seen in the wild is. Thanks for making this rainforest come to life!

We are just a few hours into day 2 of our campaign and have already soared past 3 Stretch Goals. We love the enthusiasm for this campaign and all the ideas for species you have shared. We love hearing from you all and are excited to incorporate your ideas into the game.

Climbing past $27,000 we unlocked our first component upgrade. All punchboard tokens (Animal tokens, VP tokens, and Tree Awards) will increase from 1.5 mm thick to a chunky 2mm thickness. This makes them easier to handle, more durable and will help give the game a premium feel.

As some backers have pointed out, all of the current species in the game are found in Central and South America, and it was Vincent's and my intention to have the game set in this geographic region. So, for the new species we will add, we are asking that they be found in that region. I apologize for not explaining this in the previous Update and for any of the very cool animals that this excludes (maybe they will show up in a sequel or expansion).

To give everyone time to suggest species we will be taking suggestions until tomorrow at 9AM PST. In the update tomorrow I will share a list of the proposed species and a link to vote on which 3 species are your favorite. Voting will be open for 2 or 3 days and after the winner is chosen I will update you all and present 3 potential abilities for that species. We'll have one more vote and then present the final card with a sketch of the artwork from Vincent.

Please keep sharing all of your great ideas for species in the main comments section.

Our next stretch goal is on the horizon at $33,000 and is one we are very excited to share. When this funding level is reached we will unlock a Solo Play Variant. More info and details on this fun variant to the game will be revealed once it is unlocked.

Thank you for helping us grow a fantastic forest!